Home World Sports When a Farewell Season Was Wiped Out, the Outfield Became a Diner
WorldSports

When a Farewell Season Was Wiped Out, the Outfield Became a Diner 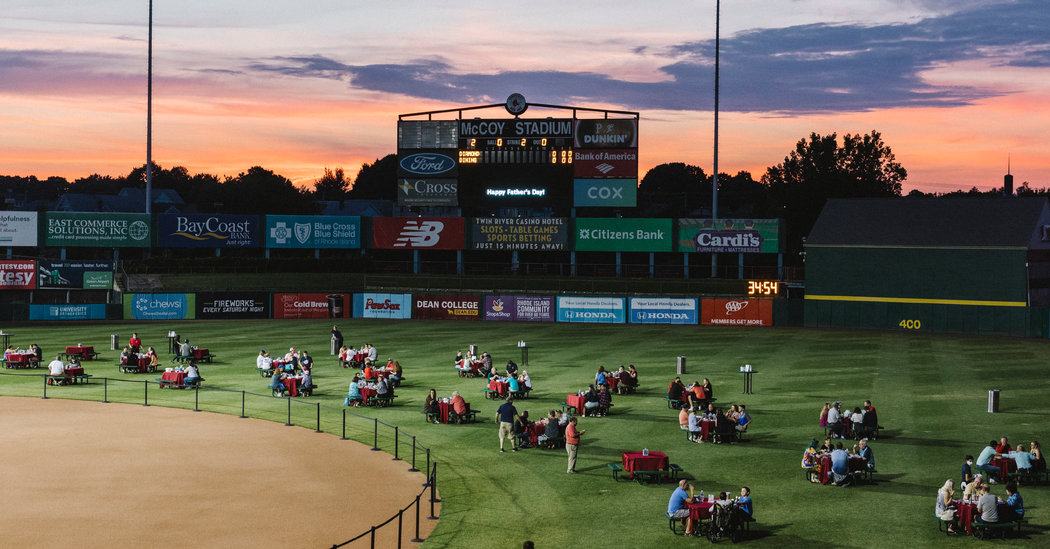 PAWTUCKET, R.I. — The long goodbye to McCoy Stadium began in August 2018, when the Class AAA Pawtucket Red Sox of the International League announced the franchise would be moving 50 minutes up Route 146 to Worcester, Mass., starting with the 2021 season.

The news added even more weight to the team’s 2020 season, which was also the 50th anniversary of the Boston Red Sox’s minor-league presence in Pawtucket. The club’s president, Charles Steinberg, had events planned throughout the season, drawing on the memories of star players like Wade Boggs, Roger Clemens, Mo Vaughn and Mookie Betts who had passed through en route to Boston.

Then the coronavirus pandemic closed the door on the season, which was officially canceled this week, leaving McCoy Stadium like the host of a going-away party with no guests.

Officials for the PawSox, as they’re known locally, feared they would have no chance to formally say goodbye to the community. They did what they could, holding virtual events with players and inviting fans to post personal messages on the stadium’s video board.

But when Gov. Gina Raimondo of Rhode Island announced in May that the state would permit outdoor gatherings of more than 10 people, “It turned a light on for all of us,” said Mike Tamburro, the team’s vice chairman who has been involved with the PawSox since 1974, including a long stretch as general manager.

The collective brainstorm created “Dining on the Diamond,” an outdoor picnic on the pristine grass of McCoy Stadium. What started on the first weekend in June with 20 tables, two seatings, and basic ballpark fare (hamburgers, hot dogs, French fries and nachos) has expanded to include a third seating, more tables, and a menu that includes a Rhode Island lobster roll, a barbecue platter, and chicken caprese.

With the minor league season canceled, McCoy will be used as an alternate training site for members of the Red Sox’s 60-man active roster, potentially interrupting “Dining on the Diamond,” but Steinberg said the club “will continue to explore ways to have a fitting farewell to McCoy Stadium.”

There is clearly an appetite. When the team announced the promotion on its website, tables for the first two days — June 6 and June 7 — sold out in 88 minutes. When June 8 was added, it sold out in the same amount of time.

For Father’s Day weekend, the team expanded to 33 tables, a nod to the 33 innings played at the stadium between the PawSox and Rochester Red Wings in 1981 — the longest game in professional baseball history. And at the urging of fans, the team’s executive chef, Tom Whalen, added more expensive items, including his favorite, eggplant Parmesan. The tables also were moved from the dirt infield to the outfield grass.

Fans reserve tables, order their food and pay for it in advance online. At the ballpark, the green metal tables are set up at least 14 feet apart and restricted to five people. Servers wear masks, but they’re not required of diners.

On each table, which is cleaned between seatings, sits a placard with the table number and an image of a notable PawSox alum or member of the Red Sox Hall of Fame (Naturally, Ted Williams represents Table No. 9.).

Finally, diners at each table receive a miniature replica of McCoy to take home.

Like other members of the club’s front office and full-time staff, Tamburro has chipped in to help run the makeshift restaurant, escorting diners to their tables and soaking in stories of McCoy memories.

Seated at Table 4 with his wife, son, and daughter on a recent Friday, James Vierra of East Providence said he had seen his first game at McCoy in the mid-1960s, when it was home to the Cleveland Indians’ Class AA team. He recalled attending a Red Sox-sponsored activity one Saturday morning with his son, Brad, who ended up playing catch with Nomar Garciaparra.

“In fact, it was right about here,” he said, noting their spot in the outfield grass. “And here I am sitting at this table.”

Under the former owner Ben Mondor, who passed away in 2010 after holding the club for decades, the Pawtucket Red Sox became a local institution with strong ties throughout Rhode Island for its charitable works. In 2015, a group led by Larry Lucchino, then the president and chief executive of the Boston Red Sox, bought the club and tried to build a new stadium replace McCoy, which opened on July 4, 1942.

After failing to reach an agreement with the state legislature, Lucchino signed a letter of intent in August 2018 to move into a new ballpark in Worcester, Mass., 42 miles away.

But the team is making the most of its last few months in Rhode Island. Steinberg, whom Tamburro calls “the master of event planning” from his work with the Red Sox, Orioles, Padres and Dodgers, marveled at the tableau in front of him last month. “Look at any place on the field and there’s a story,” he said. “A who’s who of some of the greatest players in baseball history have been here.

“It’s also a reminder,” he added, “of the vital role ballparks play in our lives.”

At Table 21, honoring Clemens, Tina Trahan remembered working in the souvenir stand as a teenager during the years when the star pitcher himself had passed through. Joining her were two friends and her father, Fred, 90, who saw the Class B Pawtucket Slaters play at McCoy in the 1940s, including a 19-year-old Chuck Tanner in 1948.

Alex Richardson, 23, the club’s community relations assistant, said he revels in the tales he hears at each table. One night, he said, he served a family that told him they had chosen McCoy for their first night out of the house since the beginning of the pandemic.

“This is an unbelievable experience,” he said.

The immediate popularity of the PawSox’s ballpark bistro was noticed across the country, and Tamburro figured it could be just the beginning. “This kind of idea could be groundbreaking for the industry going forward,” he said. “Can you imagine Fenway Park doing this when the Red Sox are on the road?”

As the sun was setting behind left field, casting shadows from the patrons and tables toward home plate, three young boys were rolling around in the outfield after finishing their dinner. Their parents were a pair of couples from Boston who had gone to high school together.

A.J. Shepherd, the father of one of the boys, looked toward where they were playing, as a Frank Sinatra song played on the stadium’s sound system, and remarked, “How many times can you sit on a real baseball field and put your toes in the grass?”

Added Claudison Jean-Francois, “The temperature is right, there’s music, and the kids are having fun. It’s perfect.”

More than 2,600 families currently are on the waiting list, anticipating when the promotion resumes. “Amazing,” said Bill Wanless, who started with the franchise in 1985 as an intern, worked as its public relations director for 29 years and became senior vice president for communications in 2015.

His new job — greeting patrons as they enter the ballpark through a gate in right field and helping them get their table number — provides a front-line opportunity to assess the success of Dining on the Diamond.

GWS Giants fear star Toby Greene could miss both matches against West Coast and Fremantle after injuring his hamstring in the win over...
Read more
Sports

Gymnasts Worldwide Push Back on Their Sport’s Culture of Abuse

A culture in gymnastics that has tolerated coaches belittling, manipulating and in some cases physically abusing young athletes is being challenged by Olympians and...
Read more

Bollywood actor Sushant Singh Rajput’s family did not complain about any lapse in the investigation being carried by Mumbai Police into his death in...
Read more

With the coronavirus lockdown slowly lifting, life is slowly getting back to normal, and every once in a while we even spot celebrities making...
Read more

ASX-listed Lithium Australia, via its subsidiary, the Very Small Particle Company or “VSPC”, has refined the process for the production of its lithium ferro...
Read more

At the onset of the coronavirus pandemic, with travel restrictions in place worldwide, we launched a new series — The World Through a Lens...
Read more
Load more

At the onset of the coronavirus pandemic, with travel restrictions in place worldwide, we launched a new series — The World Through a Lens...
Read more

Scepticism is a good thing – most of humankind once thought the world was flat after all. But even if you thought that so...
Read more

India on Monday pulled out of the Women’s World Team Squash Championship scheduled to be held in Kuala Lumpur, Malaysia from December 15 to...
Read more

Chris Froome says the two-month delay to the Tour de France has helped him make up the training time he lost while recovering from...
Read more

Genoa secured safety on the final day of the longest-ever Serie A season, while Lecce dropped down to the second division.Genoa beat Hellas Verona...
Read more