Sattankulam: plea in SC seeks stripping of Home from CM 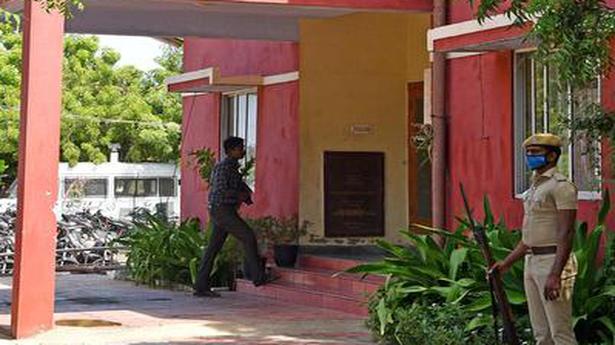 A lawyer moved the Supreme Court on Friday seeking a direction to relieve Tamil Nadu Chief Minister Edappadi K. Palaniswami of the Home portfolio till the completion of the investigation and trial in the alleged custodial torture and murder of a father and son in Sattankulam.

Petitioner A. Rajarajan accused the Chief Minister of “screening and safeguarding” the accused police officers.

The plea alleged that the Chief Minister issued a public statement on June 24, approximately six days before the investigation started, claiming that trader Jayaraj and his son Benicks died of “illness”.

Mr. Rajarajan said Mr. Palaniswami should be charged with screening with the accused using the influence of his office.

“The statement on June 24 was highly improper, condemnable and contrary to law, because the investigation procedure starting from 154 Cr.P.C and culminating in 173 Cr.P.C. had not even started until June 30. A magisterial enquiry to determine the cause of the death was at a preliminary stage”, the plea said.

The public statement was made to avoid any adverse remarks being made about his government, it stated.

“He had prima facie acted contrary to law and in derogation to the constitutional post he holds, indulged in saving the persons accused of custodial torture which resulted in a twin deaths” the petition alleged.

It reasoned that Mr. Palaniswami had administrative and executive control over the CB-CID officer probing the case. Fair and free investigation was not possible under his administrative control. Besides, the victims’ family members had received offers of jobs and compensation. This would “psychologically restrain” them to cooperate in the probe and trial.

The family members had registered a complaint on June 23 that the victims were subjected to severe physical torture at the hands of the police officers at the Sattankulam police station. The Madras High Court had also taken suo motu cognisance of the incident.

Explaining why he has filed a writ petition, Mr. Rajarajan said that “free and fair investigation is an implicit fundamental rights guaranteed. The victims’ family is in great distress. They have lost two members. It cannot be expected of them to approach this court or the High Court for the prayers sought in the present writ petition”.

You have reached your limit for free articles this month.

Find mobile-friendly version of articles from the day’s newspaper in one easy-to-read list.

Move smoothly between articles as our pages load instantly.

Enjoy reading as many articles as you wish without any limitations.

A one-stop-shop for seeing the latest updates, and managing your preferences.

A select list of articles that match your interests and tastes.

We brief you on the latest and most important developments, three times a day.

*Our Digital Subscription plans do not currently include the e-paper ,crossword, iPhone, iPad mobile applications and print. Our plans enhance your reading experience.

At the onset of the coronavirus pandemic, with travel restrictions in place worldwide, we launched a new series — The World Through a Lens...
Read more
World

Scepticism is a good thing – most of humankind once thought the world was flat after all. But even if you thought that so...
Read more
World

Bollywood actor Sushant Singh Rajput’s family did not complain about any lapse in the investigation being carried by Mumbai Police into his death in...
Read more

With the coronavirus lockdown slowly lifting, life is slowly getting back to normal, and every once in a while we even spot celebrities making...
Read more

The Tamil Nadu Bank Employees Federation (TNBEF) has called for a Statewide strike on August 20 to draw the attention of the government...
Read more

ASX-listed Lithium Australia, via its subsidiary, the Very Small Particle Company or “VSPC”, has refined the process for the production of its lithium ferro...
Read more
Load more

At the onset of the coronavirus pandemic, with travel restrictions in place worldwide, we launched a new series — The World Through a Lens...
Read more

Scepticism is a good thing – most of humankind once thought the world was flat after all. But even if you thought that so...
Read more

Sent off for a cough? FA issues guidelines to referees

Players who deliberately cough at opponents or referees can be shown red or yellow cards under new guidelines issued by England’s Football Association (FA)...
Read more

India on Monday pulled out of the Women’s World Team Squash Championship scheduled to be held in Kuala Lumpur, Malaysia from December 15 to...
Read more

Chris Froome says the two-month delay to the Tour de France has helped him make up the training time he lost while recovering from...
Read more