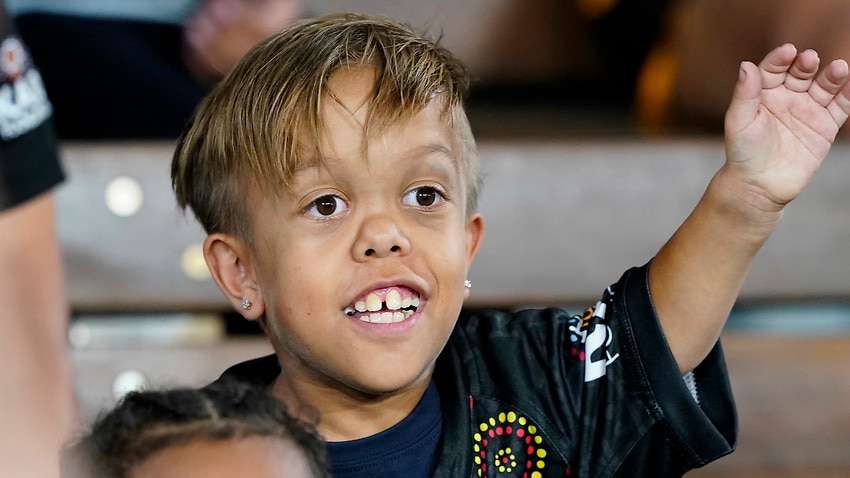 A nine-year-old Indigenous boy with dwarfism will receive a “not insubstantial” payout after News Corp columnist Miranda Devine apologised for suggesting he faked being bullied to scam money.

The confidential settlement for Quaden Bayles and his mother Yarraka was approved by Justice Anna Katzmann in the Federal Court on Friday.

A video posted by the mother in February made global headlines after her inconsolable son cried about being bullied at school and urged her to “give me a knife, I’m going to kill myself”.

The clip was met with an outpouring of support and US comedian Brad Williams, who also has achondroplasia dwarfism, set up a GoFundMe page to fund a trip to Disneyland for mother and son.

They declined to take the trip.

The mother and son sued Devine and her employer for tweeting suggestions it was all a scam and that Quaden was actually an adult actor.

When one of Devine’s 71,000 followers replied “it’s a crime if it is a scam. Child abuse. How could anyone parent do this?”, the New-York based News Corp columnist tweeted “Yep. Exactly. On the case”.

She tagged The Daily Telegraph in a later tweet suggesting Ms Bayles had coached her son.

Justice Katzmann was told Devine has now tweeted a “sincere and detailed apology”.

She wrote: “In February this year I posted some comments on my personal Twitter account about Quaden Bayles and his mother Yarraka. I now know those comments were hurtful and untrue. I sincerely apologise to the Bayles for those comments”.

Before approving the settlement – necessary due to Quaden being a child – Justice Katzmann received confirmation from the lawyers and Ms Bayles that the proposal was in his best interests.

“We believe it is quite appropriate and we are very happy with that settlement,” said Ms Bayles, via telephone from interstate.

His barrister Sue Chrysanthou noted the lack of previous defamation cases involving infants, saying it was unusual to have to assess the reputation of someone aged under 16.

The judge set out the background to the proceedings noting the suggestion Quaden was an actor and the video a fake insinuated that it was “a money-making scam”.

The confidential settlement referred to the establishment of a trust fund for Quaden’s benefit.

“The settlement sum is not insubstantial,” Justice Katzmann said.

She congratulated the parties on achieving the settlement.

Millions of low- and middle-income Australians face being $1080 worse off each year unless the government revisits its recent overhaul of the personal tax...
Read more
World

Outside the court, many of the men smiled and cheered, including dancer James Brown who, smiling, said: “I am free. It means a lot...
Read more
World

On 31 October, Queensland will become Australia’s first state to go to the polls during the pandemic.Normally, state elections pass amiably. They matter to the MPs,...
Read more

Actor Kamya Punjabi has been keenly following the developments inside the Bigg Boss 14 house. Her Twitter timeline is full of her opinion on...
Read more

Two unidentified terrorists were killed by security forces in an encounter on Tuesday night in Budgam district of Jammu and Kashmir, police said.Central Reserve...
Read more

The opening of a cotton printing studio in the city of Amersfoort in the Netherlands has revived the centuries-old textile tradition with India, according...
Read more

Don’t put up the end of recession balloons just yet

But on Melbourne Cup Day, Debelle along with the rest of the RBA will likely sign off on a string of measures including a...
Read more
Load more

Don’t put up the end of recession balloons just yet

But on Melbourne Cup Day, Debelle along with the rest of the RBA will likely sign off on a string of measures including a...
Read more

Millions of low- and middle-income Australians face being $1080 worse off each year unless the government revisits its recent overhaul of the personal tax...
Read more

Confirmed! Fans WILL be at Boxing Day Test

The Boxing Day Test match will go ahead at the MCG and in better news for cricket fans, around 25,000 spectators will be...
Read more

Grant Bradburn, the head of high performance coaching in Pakistan wants to see a significant shift in redeveloping approaches for players growing up, emphasising...
Read more

The schedule for India's tour to Australia has been confirmed with Adelaide to host a day-night Test as part of the four-match series that...
Read more